Since establishing the Active City Network in 2016, it has seen continual growth in the number of people walking and cycling to and from work, while overall injuries have declined.

The focus of the opening speeches and following discussion was on effectively accommodating people walking and cycling, both safely and comfortably.

As the City population continues to grow and with an increase in people walking and cycling to and from the workplace, there is growing competition for available space on roads. Alderman Alison Gowman explained how the City’s Transport Strategy aims to deliver more space for walking with pedestrian priority streets and freeing up space for cycling through a continued focus on reducing volume of motor vehicles.

Lilli Matson, Chief Health and Safety Officer at Transport for London, added that a culture change for all road users is required to achieve the Mayor of London’s and the City’s vision of zero deaths or serious injuries.

Jennifer Buchanan, Senior Associate at Fieldfisher, observed that while collisions between people walking and cycling do occur, there is no legal cover for either party. This can leave victims without compensation and those deemed to be at fault potentially facing hefty legal bills. It was suggested that employers could step in to offer staff who cycle to work third party cover.

Bronwen Thornton, CEO of Walk21, shared an international perspective and noted that even in Dutch cities there are also issues of conflict between those walking and cycling. The design of cities should seek to avoid this but Bronwen remarked that in crowded places like the Square Mile, cyclists just need to slow down.

The panel of employers – Nina Swallow, Health, Safety and Environmental Advisor at Normura, Harry Badham, UK Head of Development at AXA Real Estate, and Daniel Wright, Head of Facilities Management from Framestore – outlined that employers are increasingly supporting larger numbers of bicycle users. The challenge of reducing goods deliveries, providing parking and services while keeping staff healthy and safe is something they are all working towards. The panel also noted challenges over issues such as insurance for staff using new modes like e-scooters. Overall, supporting active travel is something they all wished to do and learning from each other at forums such as this help to provide solutions and ideas for all.

The evening concluded with drinks and networking whilst watching the havebike Corporate Cycle Challenge with 8 teams from organisations across the City competing on the Rollapaluza static bike race. There was some healthy competition with Nomura pipping the Bank of England to first place in the team event. The individual event saw Ian Edwards (Nomura) winning the fastest man, and Andrea Toth (havebike) taking the fastest woman. The prize of a havebike Platinum Corporate Service package was shared between all the teams who competed. 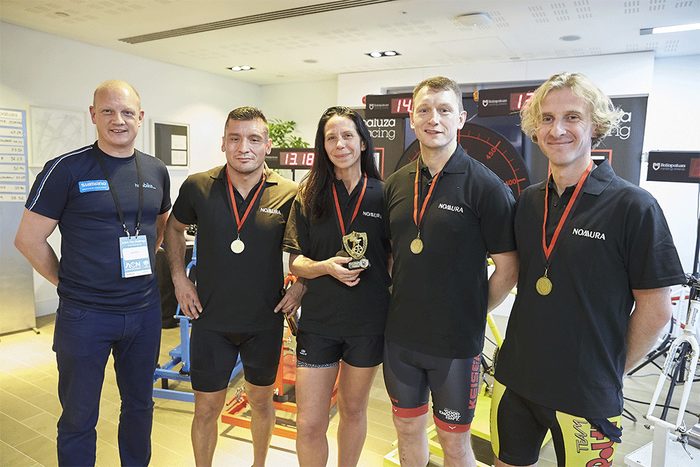